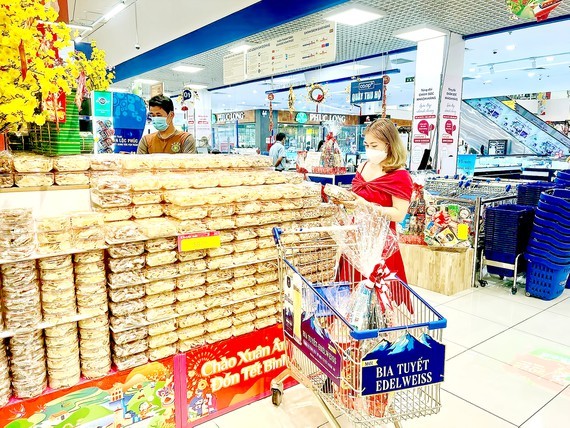 At noon on January 26, at the gate of Emart Phan Van Tri Supermarket in Go Vap District, many family groups made medical declarations and disinfection before entering the supermarket. Inside, Tet goods were displayed attractively. Vo Van Sang, a resident in Go Vap District, and his two children rushed to go shopping for supplies for the upcoming Tet holiday. “This year, Tet goods are quite diverse, with big promotions. The scene of people hustling or waiting for checking out in a long line no longer happens as before, perhaps, because many people are still afraid to go to crowded places due to fear of the pandemic," he said.

Representative of Emart Supermarket Le Huu Tinh said that sales increased by about 15 percent compared to the previous week, mainly in the group of essential goods. This year, the number of high-value packages was cut. The supermarket mainly concentrated on gift packages priced at VND400,000-VND500,000. Emart also runs a discount program from now until the day of the Tet market and keeps prices stable. Only some groups of imported goods increase the price by about 10 percent due to high transportation costs.

Similarly, a large number of customers poured into the Aeon Supermarket in Tan Phu District in the evening. Nguyen Thi Thu, a resident in Tan Phu District, said that the supply of goods was fairly abundant. Especially, most items remained stable, not increasing in price. “The pandemic situation remains complicated, but my family still feels secure when going to the supermarket to shop for quality goods. There are many affordable products, even cheaper than those sold at traditional markets," said Thu.

Representative Aeon Vietnam Bui Trung Chinh said that the number of customers of the Japanese retail network was increasing sharply nationwide. Aeon ensures a wide range of goods at stable prices, focusing on Tet food items, including fresh and dried foods. At the same time, the retailer also runs many attractive promotions, discounting up to 50-70 percent for all product lines. Its supermarkets will be open throughout the Tet holiday to serve customers.

Mr. Nguyen Ngoc Thang, Director of Co.opmart's Operation Division, also said that from the end of the previous week, two groups of goods with strong purchasing power were domestically-grown fruits and nutritious food items and confectionaries with an increase of more than 50 percent.

According to Mr. Nguyen Ngoc Thang, the purchasing power mainly focuses on the week before the Lunar New Year, instead of two or three weeks as before. Saigon Co.op has been coordinating with suppliers to continue implementing discount promotions, as well as increasing more benefits for customers from now to near the Lunar New Year on about 100 fresh food, frozen food, convenient pre-processed food products, and confectionaries to stimulate demand. 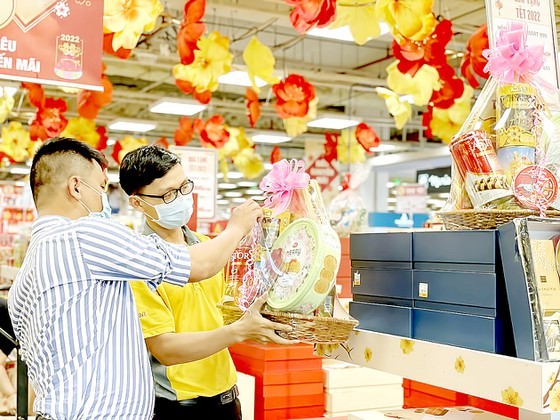 Customers buy Tet gift baskets at a supermarket in HCMC. (Photo: SGGP)
Although purchasing power remains unpredictable before Tet, most enterprises and retail systems plan to increase reserves from 100 percent to 200 percent, compared to 2021. Specifically, the Satra retail system has prepared an increase of 5 percent-30 percent of market-stabilized goods for each commodity group, with the highest increase expected to be in the group of fresh foods and essential goods. The Bach Hoa Xanh system increases production by about 200 percent, depending on the store.

Deputy Director of HCMC Department of Industry and Trade Nguyen Nguyen Phuong said that up to now, units that participated in the market stabilization program had prepared goods worth over VND20 trillion to serve the festive season. Therefore, there will not be a shortage of goods or a sudden increase in prices. On the contrary, many businesses worry that they will not be able to sell all their goods before Tet.

At night on January 26, Vice Chairwoman of the People's Committee of HCMC Phan Thi Thang led a delegation to check the supply of goods for the 2022 Lunar New Year at three wholesale markets, including Thu Duc, Hoc Mon, and Binh Dien.

At the three wholesale markets, the volume of goods and prices tend to decrease over the same period. Specifically, at Thu Duc Wholesale Market, it is expected that after the 25th of the twelfth month in the lunar calendar, the volume of goods arrived at the market will reach 4,500-5,000 tons, down about 1,800 tons or 26 percent compared to the peak of 2021 Lunar New Year. On the 28th of the twelfth month, the quantity of goods entering the market will depend on the purchasing power of the market in the days before Tet, so it will fluctuate around 1,600-2,000 tons. Similarly, at Hoc Mon Wholesale Market, currently, the volume of goods imported to the market reaches 2,300 tons and is expected to reach 2,600 tons in the coming days, and 3,300 tons at the peak of the Tet holiday, up 60 percent compared to normal days, but still down compared to last year. At Binh Dien Wholesale Market, it is expected that from the 26th and the 27th of the twelfth month, the volume of goods can surge by 50 percent, reaching about 2,500-3,500 tons per night. After that, the volume of goods will gradually decrease. By the night of the 28th, the output will merely account for 50 percent of that in normal days. Currently, 80 percent of goods at wholesale markets is for supplying more than 230 traditional markets in the city.

Vice Chairwoman Phan Thi Thang said that she was exhilarated to see that goods were plentiful, prices were lower than in 2021, and especially, domestically-made goods accounted for about 80 percent of goods supply. However, market management companies need to grasp information about the supply of goods from small traders to propose increasing supply in time during the peak of Tet and create connections with markets to consume agricultural products from the provinces to solve consumption for farmers.