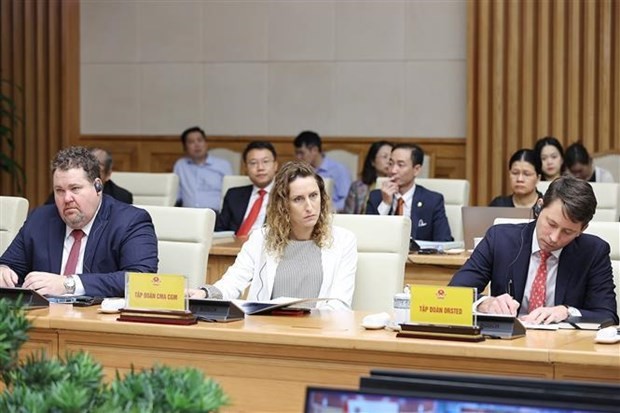 Participants at the meeting (Photo: VNA)
They applauded Vietnam for its achievements in recent years, especially in the context of the Covid-19 pandemic and changes in the world. They expressed their thanks for the support of the Vietnamese Government to the business community in general and FDI enterprises in particular.
Nakajima Takeo, Chief Representative of the Japan External Trade Organization (JETRO) in Hanoi, said that in a survey conducted by his agency on over 1,700 parent companies of Japanese firms, Vietnam ranked second among countries where companies want to expand investment.
FDI companies are eager to follow Vietnam's policy development. They underlined the need to diversify in terms of networks in the supply chain; suggested local authorities increase training for workers and provide them with accommodations and transportation means.
Kim Young-chul, Vice Chairman of the Korean Business Association in Vietnam (KORCHAM), affirmed that in the context of uncertainties in the world such as inflation and supply chain disruption, Vietnam is still highly valued thanks to efforts to maintain stable prices and foreign exchange rate.
Vietnam should have a more open visa policy to become a global tourism hub and attract more foreign investment, Kim said, adding that planning schemes for short-and long-term infrastructure, including power systems, roads, and bridges need to be improved to support high-tech projects.
Meanwhile, a representative from the Singapore Business Association Vietnam highlighted the importance of developing domestic support industries in order to reduce dependence on imported materials and called on Vietnamese authorities to simplify administrative procedures to facilitate businesses' operations.
According to Chief Executive Officer (CEO) of HSBC Vietnam Tim Evans, Vietnam continues to be an attractive destination. It is ranked 2nd in terms of post-pandemic recovery potential.
Evans recommended that Vietnam should promote regular dialogues between state management agencies and FDI enterprises in order to clarify regulations and policies related to capital flows, financing, business establishment and incentives.
He also underlined the need for Vietnam to focus on developing skilled workers, saying that this will be an important factor to promote and attract high-value investments in high-value industries such as semiconductors, automotive engineering, fintech, and logistics.
Erin Ennis, Senior Vice President of Dell Technologies Group, said that the investments over the past 30 years show that Dell's projects in Vietnam have promoted and contributed significantly to the development of electronic and mechanical industries and packing in the country.
Vietnam will play an important role in Dell's continued diversification of its supply chain, she said, adding that Dell looks forward to further contributing to Vietnam's economy and electronics industry.
Meanwhile, Michael Vu Nguyen, Country Director of Boeing Vietnam, said Boeing has introduced the potential of sustainable energy for the aviation industry and encouraged the investment, production and use of clean fuel for airlines in Vietnam in the future.
He expressed his hope that the Vietnamese Government would continue the open, flexible and effective policy for main suppliers in the aviation industry to make it easier for them to pour more investments into the country.
Vietnam should promote the deployment of green infrastructure and green materials, he said, expecting that the country will become an important source of supply for the aerospace industry in general and the supply chain of Boeing Corporation in particular.
Nguyen Hoang, representative of the Management Board of the Hanoi Southern Supporting Industrial Park, suggested large international enterprises and multinational corporations operating in Vietnam create the most favorable conditions and opportunities for Vietnamese businesses, especially those specializing in the support industry, to become their partners and satellite manufacturers; and join the production chain in Vietnam.
At the conference, representatives from a number of localities such as Quang Ninh, Can Tho, and Nghe An briefed participants on potential, strengths and investment opportunities, mechanisms, policies, the business and investment environment in their localities.