Rice harvesting in Hau Giang Province. (Photo: SGGP)
The price of rice increased slightly compared to September this year. Noticeably, when localities loosen social distancing, travel and the consumption of rice become more convenient. Enterprises have also boosted the export of rice when the transportation starts to be smooth.

“Currently, paddy prices range from VND5,000 to VND5,400 per kg. The good thing is that traders bought paddy right at the field as soon as farmers harvested rice,” said Mr. Tran Chi Hung, Director of the Department of Agriculture and Rural Development of Hau Giang Province, on the morning of October 13. So far, farmers in Hau Giang have harvested 10,000 out of 35,000 hectares of autumn-winter rice.

The Mekong Delta is in the harvest season of this autumn-winter rice crop. Rice prices vary by VND300-VND500 per kg, depending on the locality.

According to the VFA, rice prices in the Mekong Delta move differently among provinces. In Can Tho City, Long An, and An Giang provinces, rice price is quite stable. Meanwhile, it tends to increase slightly in Bac Lieu, Tien Giang, Dong Thap provinces. Accordingly, in Tien Giang, Dong Thap, and Kien Giang provinces, the price of rice edged up by VND200-VND400 per kg in the past week, reaching a selling price of VND5,250 -VND6,000 per kg, depending on the variety. 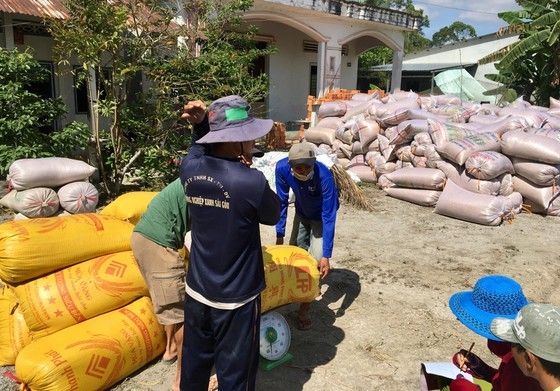 According to a rice exporter in the Mekong Delta, the domestic and export prices of rice surged because of many factors. Specifically, the government has increased purchasing for stockpiling, stimulating both domestic and export prices; enterprises have received many new rice export orders. By October this year, enterprises have exported more than 4.57 million tons of rice, with a turnover of more than $2.41 billion.