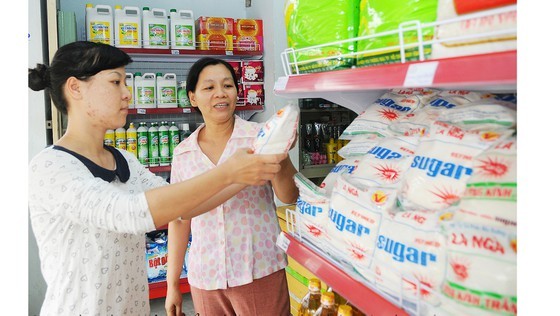 This is considered as important information, helping to create a "shield" for enterprises to protect their legitimate interests when the country integrates into the global economy, to prevent them from making the same mistakes as many industries recently, which have had to be at a disadvantage right on the home ground.

Therefore, the MoIT decided to initiate an anti-dumping and anti-subsidy investigation on cane sugar originating from Thailand. However, many domestic enterprises said that some enterprises probably imported raw sugar from Thailand to Laos and Cambodia for refining, then exported to Vietnam to evade trade remedies. Therefore, in the context of Vietnam participating in a larger and harsher "playground" like the EVFTA, Vietnamese enterprises need to be protected, and enterprises need to take measures to protect themselves.

In fact, the mechanism for conducting trade remedies under the EVFTA already exists, but the problem is that whether enterprises and associations can actively grasp and understand the regulations to apply or not. Many enterprises even have not been aware of the importance of using safeguard measures to protect their legitimate interests.

Therefore, enterprises need to actively capture information about manifestations of commercial frauds in their fields and coordinate with authorities to analyze and evaluate the impacts, thereby, together with authorities to launch investigations or apply safeguard measures to protect the development of domestic manufacturing industries.

Vietnam participates in more and more FTAs and integrates deeply into the global economy, which means that the risk of Vietnamese enterprises involved in trade remedies lawsuits is also higher. Being sued, or even imposed taxes, and the loss is not only suffered by a few specific enterprises, but more importantly, it also affects the prestige of the product categories, and even hinders Vietnamese goods when exporting to markets that have not been levied taxes.

Some economists said that to minimize the possibility of being applied safeguard measures, one of the factors for enterprises to minimize the impacts of trade remedies is to develop value chains, develop domestic raw material resources, build an export strategy in the direction of diversifying markets, enhance competition by quality and limit price competition, and consider trade remedies as a part that needs preparation in production and business strategy.

Besides focusing on in-depth development (increasing domestic added-value), relevant authorities, particularly the MoIT, need to monitor carefully to give early warning if products exported to some markets showed a sudden increase.

Relevant authorities need to strengthen the unified, throughout coordination mechanism in handling trade remedies cases between central ministries and provinces, between domestic and foreign agencies, and between State management agencies and associations, and complete the connection of the customs database with the trade remedies database to serve the investigation, application, and response to trade remedies cases.

Besides improving their understanding to protect themselves, enterprises must also be determined not to abet the act of origin fraud, at the same time, actively coordinate with competent authorities to investigate, prevent, and avoid letting the act of living from hand to mouth of a few enterprises affect many genuine manufacturing and trading enterprises.

To protect the domestic market, Vietnam has also launched 19 trade remedies investigations. The products investigated and applied import tariffs are relatively diverse, from raw materials, such as steel, metals, chemicals, plastics, and fertilizers, to consumer goods, such as Monosodium glutamate and sugar. Thanks to safeguards, many enterprises in some economic sectors have significantly improved their production and business situation, avoided losses, and gradually stabilized their production.