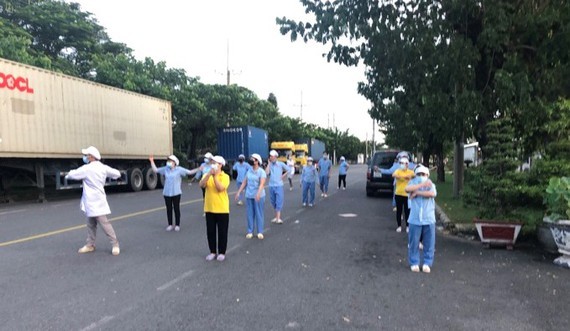 Workers of an enterprises in HCMC do exercises when implementing the three-on-site production model. (Photo: SGGP)
At the program, Chairman of the HUBA Chu Tien Dung said that, currently, due to the heavy impacts of the Covid-19 pandemic, enterprises had organized live-in at factories for workers with many difficulties and challenges that they had never encountered.

Mr. Chu Tien Dung informed that, in the past month, enterprises had prepared production solutions according to the "three on-site" model. From midnight on July 15, HCMC officially implemented the three-on-site model for enterprises that met pandemic prevention and control conditions. So far, it had been a week.

Around 390 enterprises have registered, accounting for 60 percent of active enterprises, with only 30-40 percent of workers participating. In the past few days, through the inspection of the inter-industry delegation, many enterprises did not meet the standards for three-on-site production and had to stop production to prepare them again.

According to Mr. Chu Tien Dung, the biggest difficulty in implementing the live-in production model was the arrangement for accommodations and infrastructure for workers to live at the factory and fire prevention. At the same time, the supply chain, warehousing, and production ecosystem are disrupted severely because of asynchrony. Each locality has different control regulations on vehicles for goods circulation, making it difficult for enterprises.

The HUBA has proposed the People's Committee of HCMC to have a solution to resolve the difficulties of businesses. For the problem of goods circulation, up to now, the Department of Transport of HCMC has set green channels for trucks hauling essential goods, such as food and foodstuffs, from provinces to HCMC and vice versa. The Department of Industry and Trade of Ho Chi Minh City plays as a hub and makes a general list upon request of enterprises.

The HCMC Export Processing Zones and Industrial Parks Authority or the People's Committee of Thu Duc City and districts will list vehicles transporting goods to serve production and business activities and those carrying experts and workers from provinces to HCMC and vice versa to serve the operations of export processing zones and industrial parks.

Port management units will list vehicles carrying goods in and out ports in HCMC, from provinces to the city and vice versa. The Department of Transport of cities and localities will list vehicles hauling essential goods, goods for production and business activities, and goods to ports and industrial parks and those carrying experts and workers from export processing zones and industrial parks transit through HCMC.

Mr. Chu Tien Dung said that, at present, the pandemic situation remains extremely complicated, and it has not been possible yet to assess all the negative impacts on businesses. Although enterprises have carried out the three-on-site production, it does not mean that they are absolutely safe and the possibility of infection can still occur. Therefore, enterprises must stick to the 5K regulations and take measures to prevent and control the pandemic so as not to cause damage or loss.

The association proposed the municipal People's Committee to organize the Covid-19 testing one to two times for enterprises applying the live-in model. However, currently, the testing regulation is once every seven days. At the same time, it also asked the People's Committee to develop a set of criteria to guide enterprises to organize production according to the live-in model for enterprises to be convenient and proactive. Otherwise, they will face many difficulties in organizing these activities.

In addition, Mr. Chu Tien Dung informed that the association recently surveyed 100 enterprises about the production situation in the first five months of the year. The survey shows that after three waves of the Covid-19 outbreak, the business community continued to make efforts to restore production and has had a certain growth momentum, contributing to the economic growth of HCMC. However, enterprises also faced some difficulties in the first six months of the year.

Nearly 50 percent of enterprises said that they could not access the policies of the support packages because procedures are complicated. Moreover, enterprises had not fully accessed the review process of agencies.