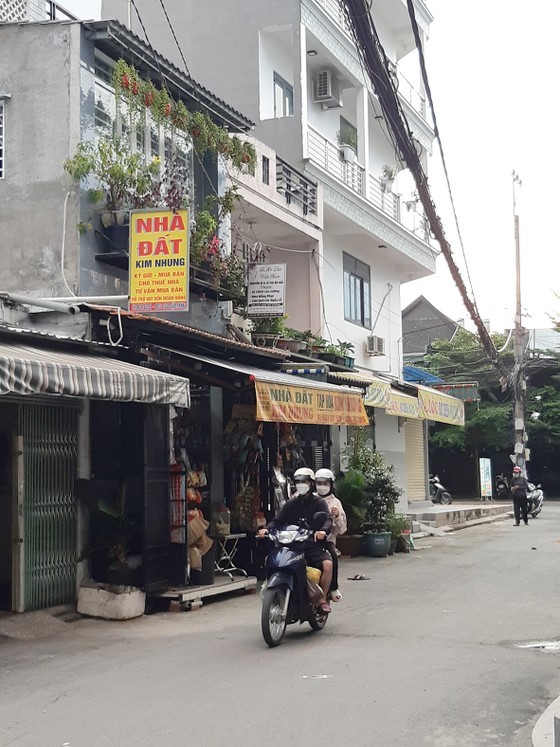 Investors are seeking houses in existing residential areas
According to many urban experts, this is completely normal because Ho Chi Minh City is the economic center of the country, it attracts thousands of migrant workers every year and many employees want to buy a house in the southern largest city to settle down.
While the demand for high-end apartments and land plots in the suburbs of Ho Chi Minh City and some neighboring provinces is decreasing, the transaction of private houses and townhouses in the city’s downtown areas has seen good liquidity. In the last days of November, many investors have been hunting houses in all alleys. Investor Dinh Quang Ngoc in Tan Binh District spent a dozen days finding a house in the downtown area at the price of VND5 billion but it seemed to be not easy.
After a month of searching for information, Mr. Ngoc decided to buy a house with an area of nearly 60 square meters in a wide alley in Nguyen Oanh Street in District 12’s Thanh Loc Ward because the house owner is in need of money so he wanted to sell urgently. At first, the house owner offered a price of VND100 million per square meter, then reduced to VND90 million per square meter. Mr. Ngoc did not have enough money, so he made a deposit of VND150 million in advance, and made an appointment the next day to do the buying and selling procedures when he would pay all.
However, Mr. Ngoc returned to the house the next day, the landlord announced that he has changed his mind and returned the deposit to Mr. Ngoc plus the penalty for the breach of contract. After a talk, Mr. Ngoc knew that the owner sold the house at the price of VND100 million per square meter to another buyer. Investor Ngoc moaned that it’s not easy to buy a house that is not too far from the city’s center at an affordable price. Just being late for a day or not making money right away, he lost the house. Many people are interested in buying private houses in districts of Ho Chi Minh City, said Mr. Ngoc.
40-year-old Mai Ha in Hoc Mon District is luckier than Mr. Ngoc. After nearly two months of hunting, Ms. Ha bought a house with an area of 55 square meters in a small alley on An Hoi Street in Go Vap District at the price of VND4.5 billion or equivalent to VND81 million per square meter.
According to Ms. Ha, friends who know that she has successfully bought this house all praised her because most of the prices of houses in Go Vap District are at VND100 million-VND120 million per square meter or more. Housing prices in District 12’s faraway wards such as Thoi An, Dong Hung Thuan, Tan Thoi Nhat, and Hiep Thanh also reach VND60 million-VND80 million a square meter.
Mr. Tuan Anh, an experienced real estate broker in the central area of Ho Chi Minh City, said that by the end of 2022, the house price in large alleys in Binh Thanh District is VND130 million-VND160 million per square meter, while it is from VND160 million-VND190 million per square meter. Houses in larger alleys or big roads have much higher prices. The housing market of private houses has seen good liquidity.
Explaining why investors prefer independent houses in the inner city, Mr. Phan Cong Chanh, General Director of Phu Vinh Investment Consulting Company, said that, townhouses as well as individual houses, especially in crowded residential areas are often favored by many people because this segment is always a real and stable demand, while real estate market in other region is only hot from time to time depending on the information on infrastructure investment and traffic. In addition, after the price fever of land and garden land in the suburbs of the city ended, it’s understandable that investors tend to return to the city’s inner areas.
From his perspective as a manager of a big company, Mr. Ho Dac Duy, manager of Savills Vietnam's housing business, acknowledged that in the past time, although the real estate market has had many fluctuations, the profit margin for single-family houses has a relatively high rate of price increase, ranging from 20-25 percent yearly.
It is forecast that the townhouse segment in Ho Chi Minh City will continue to prosper in the coming time as a lack of demand has kept Vietnam's property market relatively quiet and the liquidity is not high at the moment. Experts in the field pointed out the culprit of the scarce land fund and the limited supply while the demand for ownership is high, causing the value of townhouses and villas to increase sharply.
According to an analysis by Mr. Dinh Minh Tuan, Southern Regional Director of Batdongsan.com.vn, recent market volatility pushed investors to tend to look for real estate products with high liquidity. While the current domestic inflation pressure is increasing, most investors do not want their money to depreciate, so they will pour money into real estate.