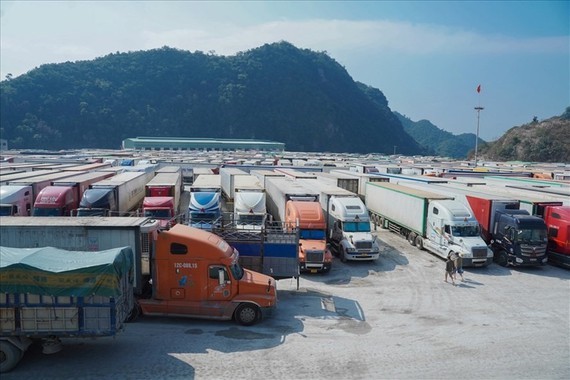 The congestion of agricultural products for export at the Northern border gates often occurs. (Photo: SGGP)
To prepare for the question-and-answer session of the Minister of Industry and Trade Nguyen Hong Dien this morning, March 16, the Economic Committee of the National Assembly sent the monitoring results on the recent congestion of agricultural products at border gates in Lang Son Province and Mong Cai Border Gate in Quang Ninh Province to the NA deputies.

Both traders and manufacturers prefer the convenience

According to the report, actually, some goods cannot be exported because China has applied technical measures on imported goods, not exactly because it applied measures to prevent and control the Covid-19 pandemic. Meanwhile, goods imported from China into Vietnam have faced no difficulty in customs clearance.

Meanwhile, the production of agricultural products in Vietnam has not been close to the needs of the export markets; product quality and packaging have not been guaranteed; the production areas are registered slowly; traceability has not been paid enough attention. Therefore, many agricultural products can only be exported to China through cross-border trade instead of official export channels. Meanwhile, Vietnam still sees a trade deficit from China. However, there is no reciprocal policy on technical barriers, such as technical standards, quality, and labels, applied to goods imported from China. In addition, it lacks specialized drivers, and there are not enough transit vehicles for exported goods from Vietnam to China.

China's mandatory application of Decree No.248 and Decree No.249, effective from January 1, 2022, on food products exported to the Chinese market is to strengthen the application of stronger technical measures than before. This is one of the reasons why Vietnam's export turnover to China has decreased. Vietnamese agricultural products exporting to China will face more difficulties because of these technical barriers.

Subjectively, most Chinese traders prefer cross-border trade to reduce taxes and fees with simple implementation methods. Vietnamese enterprises are mainly small-scale, so they choose cross-border trade, making the problem of congestion of agricultural products happen again and again at the Northern border gates.

Only nine kinds of fruits have officially entered the Chinese market

Noticeably, Vietnam has signed a free trade agreement with China. Negotiations on import tax have been completed, so many agricultural products have enjoyed a zero-percent import tax rate when exporting to China. However, negotiations on quality control remain slow, so only nine Vietnamese fruits have been allowed to be exported to China.

All the remaining fruits can only be exported to China through cross-border trade, mainly via Tan Thanh and Coc Nam border gates, and a small part via Huu Nghi and Chi Ma border gates.

At the pair of border gates Tan Thanh - Po Chai, although fruit export activities in recent years have seen many positive changes and applied technology in information exchange and transactions, it has still not been methodical. Negotiations on quarantine procedures are also slow, so China continuously strengthens the application of standards on origin and label, at the same time, tightens control on goods quality, food safety standards, and inspect 100 percent of agricultural products imported from Vietnam, leading to a prolonged customs clearance time, increasing congestion, especially during the main harvest season.

The NA's agency also pointed out that the coordination of some localities with export agricultural product growing areas has not been really close and timely. Although many documents issued by the Government, ministries, agencies, and Northern border provinces, especially Lang Son Province, recommended, warned, and suggested coordinating in regulating production and transportation of goods to the border, the efficiency remains low. Congestion still occurs every year at the border gates during the main harvest season.