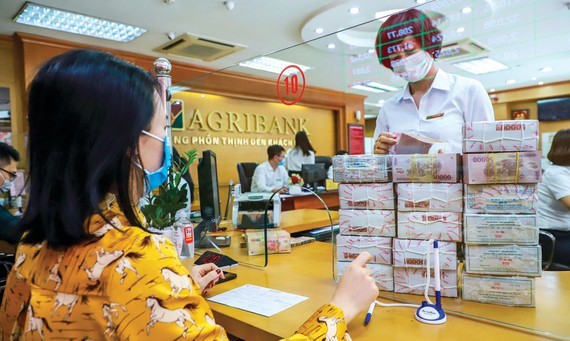 Frenzy to buy
In a report on the money market for the week 27 December to 31 December 2021, the SSI Securities Analysis Center and SSI Research said that during this time the State Bank of Vietnam net injected VND 10,540 bn through buying a 14-day term on the open market at an interest rate of 2.5% per year. In this, transactions were concentrated on the last day of the week for about VND 9,980 bn. Market analysts say that this development happened under pressure of local liquidity shortage at the end of the year.

Earlier, Saigon Investment published an article reflecting on the liquidity of the banking system at an unsettling time, with credit growth broken, reaching 12.68% as of 20 December 2021. Simultaneously, capital mobilization by credit institutions as of 24 December 2021 only increased by 8.44%. The slow pace of mobilization compared to credit was the reason when the State Bank of Vietnam was compelled to inject money.

Nonetheless, the savings channel has not yet escaped from strong competition from securities and real estate channels, because banks raising interest rates by 0.3% to 0.5% have not yet created a stable base. Banks have accelerated the issuance of bonds to increase capital, and the issuance value of each batch is up to trillions of dong and the frequency is increasing.

At Agribank, the bond interest rate is 1% to 1.2% per year, higher than the average twelve-month deposit interest rate of four banks, namely, BIDV, Vietcombank, VietinBank, and Agribank, where bondholders receive interest every six months. The fact that banks not only promote capital mobilization in Markets 1 and 2, but also create big waves on the bonds market, showing that capital needs of commercial banks are very large today.

Compared to the task of raising capital, issuing bonds is a quick solution to many financial problems. First of all, it is necessary to mention the need to issue bonds to increase Tier 2 capital, to ensure capital adequacy ratio, because credit growth is much faster than equity growth. This is always a constant demand of banks besides increasing Tier 1 capital. In the 11 months of 2021, there were VND46,500 bn in Tier 2 capital accounting for 27% of total issuance volume. Another reason is that banks have to restructure debt repayment terms according to Circulars issued on 01/2020, 03/2021, and 14/2021, with the value of accumulated debt extension and postponement until 20 December 2021 of about VND607,000 bn.

In the plan to issue VND9,000 bn in bonds, BIDV said the purpose of the issuance is to increase the size of the bank operating capital, creating more channels to attract medium and long-term capital, and meet the diverse investment needs of customers, while also ensuring the sustainability of the bank capital. The proceeds from the issuance of bonds will be used to lend to the economy for many industries such as production, electricity distribution, industry, and industrial trade. Agribank mobilizes long-term capital to meet loan demand, supplement loan capital demand for energy, agriculture, rural areas, seafood, processing, and for manufacturing industries.

Most worrisome is that if banks make it a common practice to buy from each other, then there will be several expected risks in the future. The bond interest rate is getting higher and higher, while the volume of issuance is increasing, and if banks buy and sell bonds it will cause capital to flow around in the banking system and as a result the capital flow will become less transparent. The reality is that banks need money to supplement medium and long-term capital, so they have to continuously mobilize capital from Market 1, which is from bonds. However, the fact that banks own each other's bonds will make it difficult to distinguish whether banks are attracting capital to supplement medium and long-term capital for lending, or issuing bonds to meet all their capital adequacy ratios.

medium and long-term capital transparency the issuance of bonds