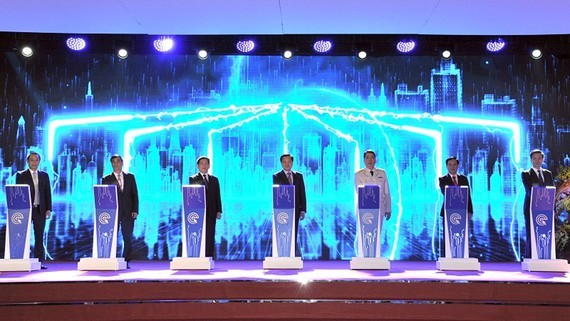 Participants press buttons to kick off  e-invoice
The Minister made the statement at an online conference held by the General Department of Taxation to announce the implementation of the first phase of the electronic invoice system on November 21.
The Minister also directed the tax sector to make efforts to successfully apply the e-invoice. He thanked leaders of localities and businesses for their support in the successful application of the e-invoice during the first phase.
Director of the General Department of Taxation Cao Anh Tuan said that 550,000 businesses in the country have been applying e-invoices, meanwhile according to the Law on Tax Administration by mid-2022, all businesses establishments, business households, and individual businesses must issue e-invoices.
Therefore, the tax sector has implemented the e-invoice system in two phases. The first phase will be implemented in some cities and provinces namely Hanoi, Ho Chi Minh City, the Northern City of Hai Phong, the northern  provinces of Quang Ninh, Phu Tho and the Central Province of Binh Dinh, starting from November 2021 while the second phase will begin on June 30, 2022, in the remaining 57 cities and provinces.
Being a key one in the digital transformation process in the Finance industry, up to now, the tax sector's information technology system has comprehensively developed, digitalizing all stages of tax administration including receiving, handling dossiers, calculation of tax obligations of individuals and businesses across the country with over 41 million tax codes and hundreds of millions of tax records.
Although e-invoice is a new technology with many advantages, it is a huge challenge to change a long-standing mechanism; therefore, the support of local authorities, departments, and taxpayers is needed.
The e-invoice will contribute to the establishment of an equal, transparent and favorable business environment for people and businesses as well as the successful implementation of the National Digital Transformation Strategy, said Deputy Prime Minister Le Minh Khai. He also disclosed that the Party and the Government are determined to build e-government, moving towards the digital government.
In particular, the implementation of e-invoices is a step forward to the transition to a digital environment, an integrated communications environment where digital devices communicate and manage the content and activities within it.
Therefore, the Deputy Prime Minister said that digital transformation requires the entire machinery of the state’s determination as it will be implemented synchronously at all levels.
He also highly appreciated the Finance sector in general and the Tax sector in particular for making great efforts in reforming and applying information technology in tax administration.
Thanks to the application of IT in the sector, 194 tax administrative procedures have been reduced (from 498 procedures to 304 administrative procedures in the tax field), and 150 tax administrative procedures have been integrated into the National Public Service Portal. It takes 384 hours to pay taxes and social insurance whereas it took 498 hours to do this in 2019. 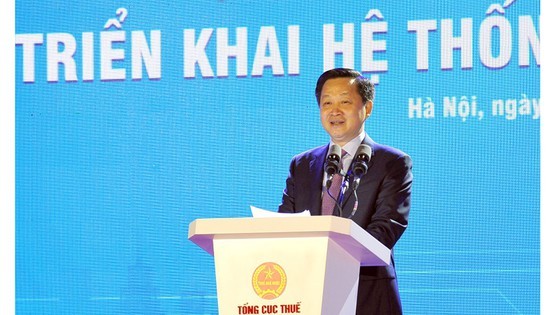 Deputy Prime Minister Le Minh Khai
However, the Deputy Prime Minister also requested ministries, agencies, and leaders of people's committees in provinces and cities across the country to be thoroughly aware of their responsibility for implementing digital transformation in localities including the application of e-invoices.
The conversion to e-invoices will help businesses reduce costs compared to paper invoices as well as help the financial industry build big data. Not only tax authorities but also businesses and residents should carry out digital transformation, making an important contribution to the development of e-government and innovation in state management.
In addition, the Deputy Prime Minister also asked the financial sector to coordinate with ministries and sectors to focus on promoting electronic payments, creating a transparent economy.
Speaking at the conference, Chairman of the Ho Chi Minh City People's Committee Phan Van Mai said that the city has established a steering committee led by a vice chairman who will review and prepare well human resources and technical solutions. The City Tax Department has increased propaganda posters, guidance, and support for businesses in the application of e-invoices associated with digital transformation. Mr. Mai announced that the southern largest city will always accompany and be ready to help businesses remove hiccups along the way. 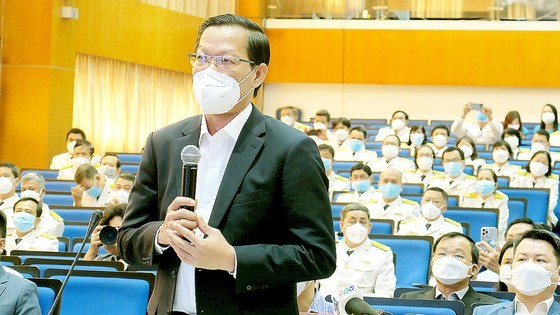